Spaghetti with Artichokes, Lemon and Ricotta 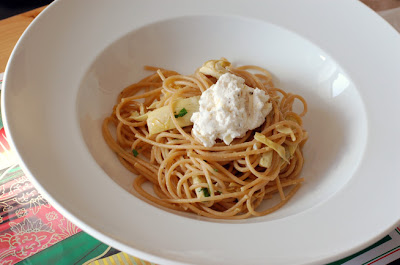 Happy New Year!  I cannot believe I haven't written any blog posts since the end of November.  Honestly, photographing what I've been cooking has been one of the biggest hurdles since the Bay Area can be rather low on the natural light in which we all love to shoot.  I've been looking around at several solutions for lighting and/or flashes so hopefully I won't go into these low light lulls in the future.

This dish was my own adapted version of a seasonal spring recipe I found in A Year in a Vegetarian Kitchen.  I made a few slight changes and added some of my own ideas and came out with a really delicious, simple dish that was full of flavor. 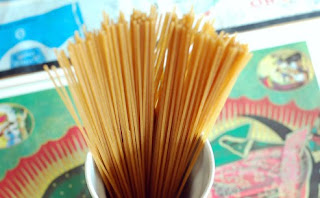 The recipe in the book is titled "Spaghetti with Crispy Browned Artichokes" and is in the Spring section.  Since fresh artichokes are not in season in California at the moment, I decided I would use canned artichokes and improvise from there.

1 lemon, halved
1 can or jar of artichoke hearts, drained and patted dry with a paper towel (I used hearts in water, but I suppose the marinated variety would also be an option)
1/3 cup of extra-virgin olive oil
2 garlic cloves, peeled and smashed
salt & freshly ground black pepper
1/2 pound of spaghetti
2 tablespoons minced fresh parsley 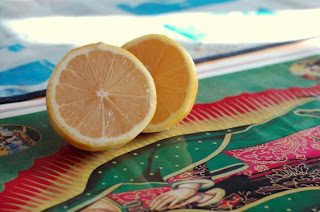 To begin, bring your pasta water to a boil.

Place the oil and garlic in a large skillet.  Drain artichokes and pat dry.  Add to pan.  Turn the heat to medium and cook, stirring often, until the artichokes begin to crisp and lightly brown.  This took me between 12-20 minutes.  About half way through, add the juice from both lemon halves over the browning artichokes.

Meanwhile, to assemble the ricotta topping, mix all ingredients together in a small bowl and leave to sit.  The longer it sits, the more the flavors will come together and deepen.

Before draining your cooked pasta, reserve about 1/2 cup of the cooking water in case you need a little moisture later.  Drain the pasta when it reaches al dente, but do not rinse.

Once the artichokes are browned to your liking, season with salt and pepper to taste and either remove the garlic cloves or smash with the back of your spoon and stir in for flavor.  Toss the pasta with the artichokes and parsley, adding the reserved pasta water as needed.  Serve immediately with a heaping spoonful of the ricotta on top or other grated cheese as you like.
Posted by annalea at 2:20 PM